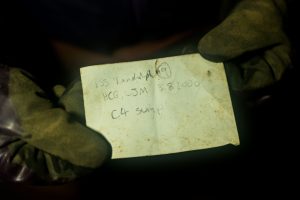 On the 2nd of July 2017, Tony Seddon of Starless River surfaced in upstream 2/7 aka Cave of the Witches Eye after a 140m exploratory dive at over 30m depth, resulting in a historic connection between Sistema Verdelluenga (C4) and 2/7.

The note seen above is the survey note left by Hilary Greaves and Lynn Cooper at the upstream limit of their surveying in 2/7 in 2000. They fixed it to a cairn hoping that one day a cave diver might surface out of the blue pool before them, leaving footprints in the history of time, yet again. 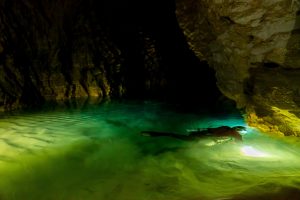 Over 30 years of hard work by Oxford University Cave Club and more recently the Ario Caves Project has finally come to fruition, and the Ario Dream of Europe’s deepest cave is one step closer to being realised.  The C4-2/7 cave system alone has jumped from 191th in the world to 140th with the combined system now being 905m deep. When this system is connected to the higher cave F64, which is getting ever closer now, the system will increase to 990m deep. The final but not trivial piece of the puzzle will be the connection of the Ario Master System (F64-C4-2/7) to its resurgence cave Culiembro flowing out into the Cares Gorge, culminating in a world class depth of well over 1,700m. 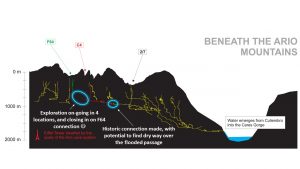 These successes have involved a tremendous amount of back breaking work and dedication from a large number of exceptional cavers, all of whom do this out of their own pocket for ‘fun’ on their ‘holidays’.  This year was the 3rd year of exploring, the 3rd year of lugging heavy, bulky, life dependent dive equipment down and out of a 600m+ deep cave, to make the connection. The first two years of exploration in the sump, named Special Agent Sea, were carried out by cave diver Paul Mackrill and succeeded by Tony Seddon in 2017. 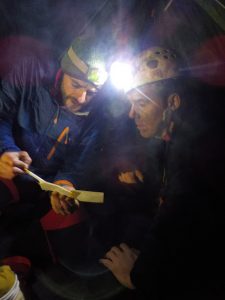 This is a very significant piece of history for the Ario Caves Project and we were very privileged to have this year and last years expedition captured on camera by Hot Aches Productions director Paul Diffley. The feature length film is likely to be premiered at this years Kendal Mountain Festival the weekend of the 16th to 19th of November 2017. 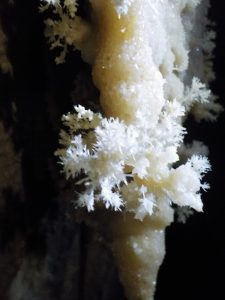 Exploration at the upstream end of the system is still ongoing, with another major success in finding the way on in Tinkle Tankle passage, which issues the bulk of the water and a powerful draught. Two further leads were pushed up an inlet yet to be named, one of which yields cave of impressive proportions and the Sanctuary aid climb ‘the Cult’ was climbed for over 75 meters with passage visible above. We will give further updates on all the upstream exploration once we have finished fettling the survey data. Watch this space.

So, 2017 has been particularly good for the Ario Caves Project

More photos and the film trailer to come.